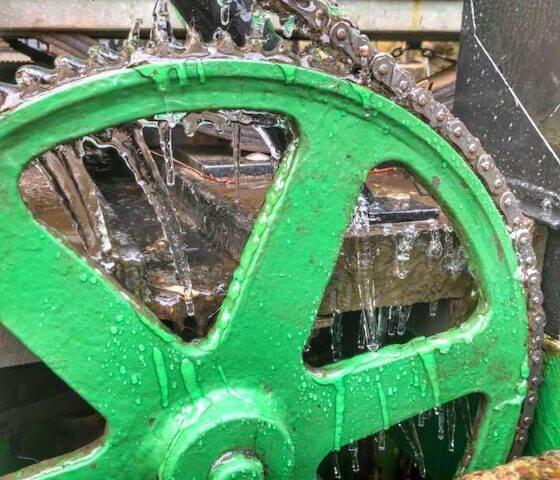 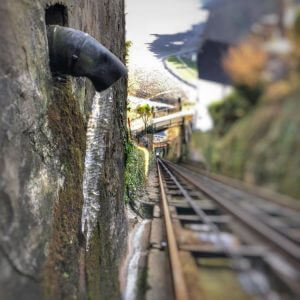 The Victorian engineering of Lynton & Lynmouth Cliff Railway has often been described as being ‘frozen in time’. But this became a reality this week when the famous water powered railway literally froze. The Lynton and Lynmouth Cliff railway, which was built in 1888 is the only completely water powered railway in the UK and one of only three examples left in the world. The funicular cliff railway relies on a simple balancing principle and gravity.  The two cars are permanently attached to each other by two hauling cables that run around a huge pulley wheel at the top and the bottom of the tracks. When each car is ‘docked’ with full water tanks the cars are in balance and are ready for loading. Each tank holds 700 gallons of water which is supplied directly through more than a mile of pipe from the West Lyn River. The unique braking system of the Lynton & Lynmouth Cliff railway is also completely water powered.

Ashley Clarke, Chief Engineer & Manager, stated that: ‘The freezing weather conditions, particularly the wind chill at the top of the cliff, has frozen our water supply, currently we are unable to operate safely as our braking system also relies on unobstructed free flowing water, it is an unusual event, but for a fully water powered railway the weather does present some challenges.’

The Cliff Railway opened for the new season on February 10th so it is unfortunate that this has happened just two weeks into the new season. However, the company have stated that ‘safety at the railway is taken very seriously, and whilst we regret that we have had to close, we are monitoring the conditions of the water supply closely. As soon as the railway is able to operate freely, and with an unrestricted water supply then our service will resume’. The company added: ‘However, our Cliff Top Café is still open for hot food and drinks, the public can still view the cliff railway during the closure’.