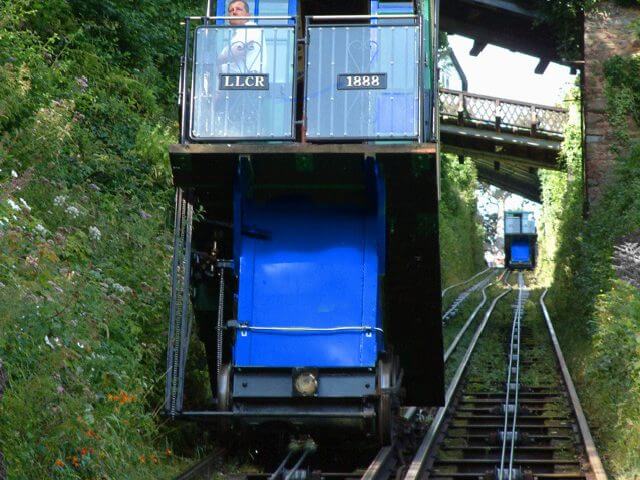 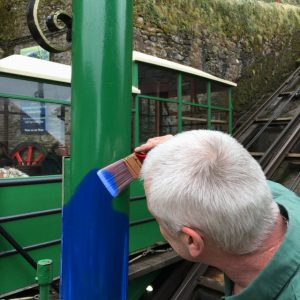 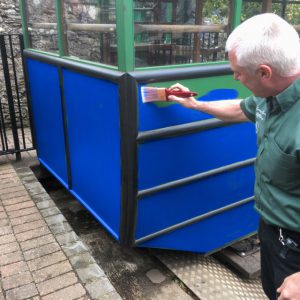 April 6th 2018 is the 130th anniversary of the opening of the Lynton & Lynmouth Cliff Railway. To mark the occasion, cliff railway engineers and staff have worked tirelessly this week re-painting the carriages in the original heritage ‘Oxford Blue’ as a special one-off Birthday celebration.

Chief Engineer, Ashley Clarke, stated that ‘It’s exciting to finally see the carriages painted as they were originally intended, we understand from newspaper articles from the period, that the colour change [to green] was initially a result of local opposition, as shortly after it’s opening the cliff railway was felt to be too prominent on the cliff side’.

Company Chairman, Rob Newman, when interviewed said ‘Only recently did we discover that a local petition, raised in 1891 just three years after the railway had opened, was upheld and the company was ordered to change the colour from Oxford Blue to Buckingham Green to make the railway more appealing and in keeping with the local area and landscape’.

Whilst controversial, the company thought that the colour change would really boost visitor numbers at the start of the new season, although was quick to add that ‘Whilst it is exciting to see the railway transformed in this way, we do intend to re-paint the carriages back to their traditional green shortly after the 130th Birthday celebrations’.

Visitors wishing to see the railway in the new colour may do so until midday on April 1st.